My Dinner with Peter (or "I Dined with a Monkee") 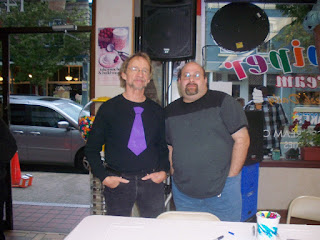 I'm still thinking about Peter Tork tonight. So, I thought I'd share one of my favorite moments with him.
October 3, 2010 - Greenport, NY      Peter played a small, private event at Sandpiper Ice Cream (I was running sound). After the show, Peter, the store's owners, Paris Stachtiaris & Jessica Nilsen, Jessica's daughter Alley and I went out for a late dinner. As we were sitting around the table making small-talk, there was a small lull in the conversation. During that silence, the overhead music in the restaurant was playing Elvis Presley's cover of "Until It's Time For You To Go". (Most Monkees' fans are well familiar that in 1965, under the pseudonym of "Blessing", Michael Nesmith recorded the song for Colpix records.) As the song played, I looked across the table at Paris. He looked back at me. We both looked at Peter, and then back at each other. Nobody said a word, and after a few seconds, Peter breaks the silence and says "…
Post a Comment
Read more

Reflections on John Lennon on the Anniversary of his Murder


From the time I was old enough to listen to & enjoy it, my father (a former Disc Jockey) raised me on what he considered "The Holy Trinity" of Rock & Roll; Elvis Presley, Fats Domino, & Little Richard.

From the time I was in Nursery School until 4th Grade, I wanted to grow up to be Elvis.

I mention this as a preface to my story:

December 9, 1980-
I was 8 years old.I was getting ready to go to school, and the TV was on.
I just wanted to watch my early morning cartoons, but the only thing on every channel was the news.
All I saw were people gathered in enormous crowds, crying in a way that I'd only seen my father cry on August 16, 1977 (when Elvis Presley died).My dad was already at work that morning, so I asked my mother, "Mom?
Why are all these people so sad?"She looked at me and said, "John Lennon was murdered last night.""Who's John Lenn…
Post a Comment
Read more

October 09, 2018
First of all, let me state right from the beginning that THIS IS NOT A POLITICAL POST!

I won't lie. The events of the last few weeks here in the USA have had me "triggered" (for lack of a better word), and I need to talk about it.

I BELIEVE Christine Blasey Ford. No, there was no physical evidence. No, there were no  corroborating witnesses. No, she doesn't remember all the exact details. But does that mean that it never happened? No, it does not. Why didn't she come forward?  I can't answer that. All I can say is that many people never come forward for one reason or another. But, I believe her. I believe the victims and survivors, and here's why: 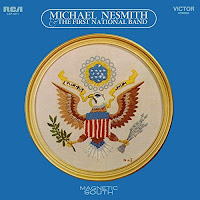 On Monday, September 17, 2018 I had the privilege of seeing one of my absolute favorite singer/songwriters of all time.While it wasn’t my first time seeing him (it was my 3rd), I think this might have been the most meaningful.

But first, a (not so) little back story…

If you know me, you’ll know that I’m a huge Monkees fan. I’ve been covering Monkees songs as long as I’ve been playing live.In doing so, I’d always found myself favoring the songs sung (and mostly written) by Michael Nesmith. Contrary to popular belief, Mike was not the only musician in the Monkees. He was however, the most prolific songwriter of the group. For the most part, his lyrics always seemed more natural than the other songwriters for the Monkees. More personal and heartfelt. I don’t know how to really explain it. His music just always seemed to resonate with me. In recent years, his solo work has affected me even more so. While I’ve been a fan of almost all of his solo output, his first 6 solo albums released o…
4 comments
Read more 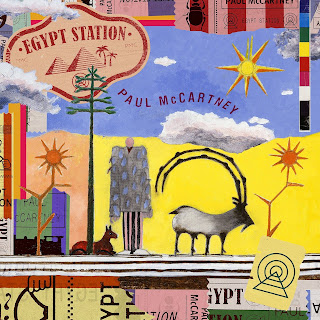 ***this review was written and originally posted on Facebook on Thursday, September 6, 2017. It has been updated here to include the two extra songs included on the "Deluxe Edition" CD available exclusively at Target stores in North America***


I've listened to "Egypt Station" a couple of times now, and I'm pretty confident that this is where I stand on the album as a whole. First thing, right off the bat, I want to state that I won't be talking about his voice. In fact, I think his voice sounds much better here than it does in concert. That's ALL I need or want to say about his voice.

I've never been one to complain if a "legacy artist" like McCartney tries to make a "modern" or "current" sounding record. Truthfully, I admire artists that try to keep their sound fresh, and evolve with the times. "Egypt Station" does this very well. I have to admit that I love the production. It's crisp and punchy. It&#…
Post a Comment
Read more

As some of you know, I have a tendency to ramble form time to time. So I apologize in advance for the length of this post.

First of all: Mark, Carol, Michelle & Tilly Lapidos -- Nobody really knows how hard it is to create, produce and curate an event like this. Thank you for everything you've done and continue to do to make this happen year after year. It's been an amazing personal journey for me since 1991 to go from being an attendee, to becoming a featured performer on the Apple Jam stage. Once again, I thank you for the opportunity. I look forward to being a part of the Fest for many years to come.

April 08, 2018
OK, we've covered how I got started. So now we'll get into how and why I perform my shows the way I do. This may be a little long. So I'll divide it into parts. In the meantime, grab a beverage, sit back, relax and read on...

I've always wanted to be in a band. Well, I should clarify a bit. I've been in bands over the years, and for the most part, I've loved the experience. But what I've really wanted, was to be the frontman and leader of my own band.

I never wanted to rule with an iron hand. But at the same time, I've always had specific ideas of what I wanted and expected from a band. Here's the thing though. I've always been difficult to work with. What I didn't really understand until now though, is why that's been the case. I'm moody. I'm opinionated. I suffer from depression (which exacerbates those things), and for a long time, I was never very good at interpersonal communication. That lead to a lot of misunderstanding (but …
Post a Comment
Location: Danville, PA 17821, USA
Read more
More posts